So recently I’ve been working with some colleagues to produce some utilities for UE4 to create an electro-acoustic composition – there’ll more details about these in the near future… But suffice to say they involved spatialization of sounds, movement following pre-defined patterns and some serialism stuff.

As well as the various methods of playing back soundfiles, we also needed real time control / triggering of sounds using OSC data so that the project could be controlled by two performers using iPads. We used the excellent OSC Plugin created by Monsieurgustav and available here, and while it does work well and is easy to setup it didn’t quite offer the functionality that we needed – Namely the ability to save the OSC addresses used as control data, recall these between sessions and set up easily managed routing of the different incoming OSC data within the project.

So, I built something that did…

I produced a BP actor that can be dropped into the level and will sit there receiving any incoming OSC data and parsing it according to some user defined settings so that individual addresses can be used to control functions within the project.

The saving and recalling of OSC addresses was relatively simple and made use of the SaveGame class to create a data file that the OSC addresses could be written to (this is saved within the ‘Saved’ folder of your project). This is handled using the [Event BeginPlay] to check for an existing data file (one is created if not already in existence) and any saved data is recalled and stored in a temporary variable.

I added an OscReceiver component (part of the OSC plugin) to the BP actor so that it could receive OSC data. 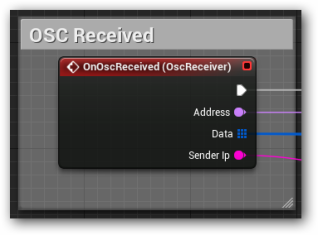 If the actor is set to ‘Learn’ mode then the address of any incoming OSC data is stored in an array and saved – the addresses are checked against the contents of the array to ensure that there no repetitions.

If the actor is not set to ‘Learn’ mode then incoming OSC data causes an event dispatcher to be called so that the OSC data can be received in any BP within the project (eg. Level BP). 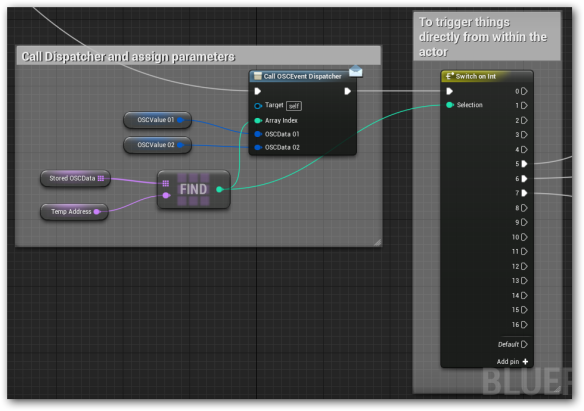 I’ve made the OSC Utility available here along with a copy of the OSC plugin, a demo project which illustrates how the actor functions and a .pdf detailing the systems in use.